Group A kicks off with CLG vs. BitterSweetGG and ACE vs. Excellence These results don't come as much of a shock as CLG and Ace were the clear favorites of the group. Now it's time to decide 1st seed in Group A.

CLG vs. Ace for 1st seed in Group A. BittersweetGG vs. Excellence in the elimination decider match. 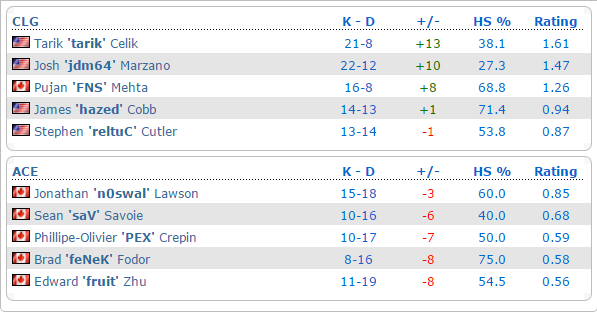 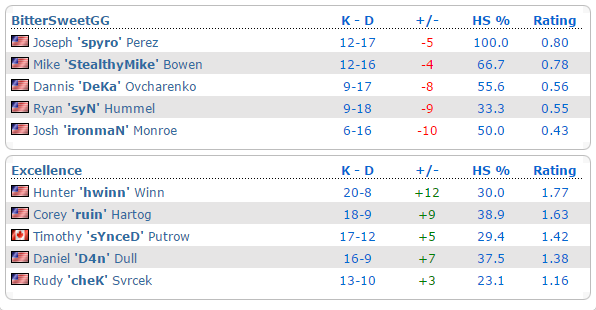 After the Defeat BitterSweetGG become the first team eliminated from the tournament. CLG proceeds as the 1st seed of Group A.

Decider match for 2nd seed of Group A, Excellence vs. Ace 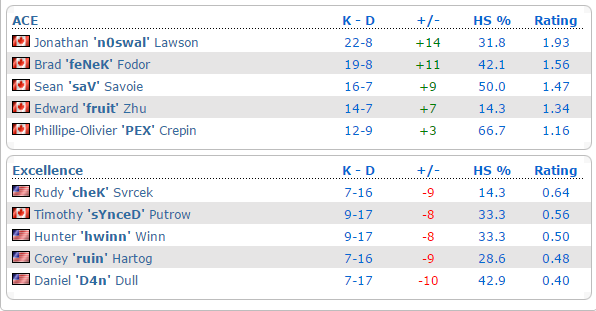 Excellence becomes the 2nd team to leave the tournament after coming up flat against Ace.

Group B kicks off with CLG red vs. 3sUP and Enemy vs. Swarm

This game was a game of runs. 3sUP started off great taking a early 6-3 lead. CLG red then quickly responded by winning 6 straight to bring it to 9-6 at the half. The 2nd half was all 3sUP and Davey, as they won 10 straight round while Davey was 18-1 in those rounds. The game ended 16-9 in the favor of 3sUP.

There's not much to say about this game other than that Enemy's CT side inferno seemed unbreakable as they secured a 14-1 CT half. After Enemy securing the next pistol, Swarm then responded with 4 straight rounds, but the lead proves too much for a comeback as Enemy take it 16-5.

The game started off much like the 3sUP vs. CLG red match with it being 6-9 going into the half this time in 3sUP's favor. The second half was also more of the same as 3sUP dominated CT side Dust2 with a 7-1 scoreline and take the map 16-7 and the #1 seed for Group B.

This game proved to be the first close match of the tournament with a 8-7 scoreline at the half with Swarm leading. The second half remained close, but in the end Swarm pulled it out 16-13; sending CLG red packing as the 3rd team eliminated from the tournament.

A rematch of Enemy vs. Swarm to decide who goes home and who goes forward as the #2 seed in Group B

The biggest game so far for some of these young players career starts off very back and forth as they sit dead even at 3-3. The first half remains this way, as it ends 8-7 with Enemy having the lead going into CT side. Swarm quickly responds with picking up pistol round, but is quickly shut down by the Enemy force-up. Swarm struggles to pick up any rounds on T side as the only pick up 1 more before Enemy closes it out at 16-9.

Enemy moves forward as the #2 seed in Group B, while Swarm is the final team sent home on the 1st day of WinOut Lan.